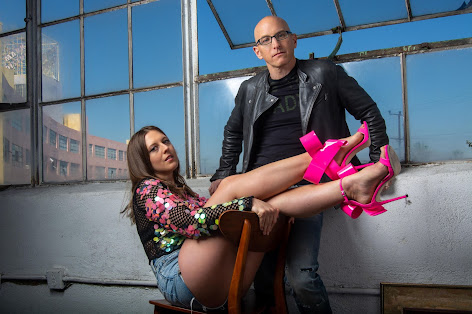 I'm happy to feature the new passionate single and visuals from Santa Monica based indie pop duo Only Bricks. Entitled "Big Girl Shoes" their single is based on a metaphor for the "double bind of needing to look feminine but not sexy, an added weight women carry at work on top of their normal job responsibilities".
Produced by long-time collaborator Cameron Stymeist, the pair wanted the recording to reflect women's power without sounding angry -  a song with a pop surface and a punk soul. They also added guitar feedback and cable noise in the background to give it a bit of a live, in-your-face feel, and the dirty 808s throughout adds a disturbing quality. The video was created by female director Rebecca Eskreis and an all woman team.
The song celebrates the dying breaths of the patriarchy with its "Glass falling from the ceiling cuts sharp on its way down" lyric, as slow progress continues to be made for women's equality".
Indie pop duo Only Bricks is comprised of lead vocalist Anne DiGiovanni and guitarist Joseph Lewczak. Married in 2017, we gave birth to our debut EP "Foundation" in Santa Monica, California in early 2018 - not the grandchild our parents wanted, but hailed by Vents Magazine as the "perfect California indie pop record". Our music feels like the rock, pop, and dance songs we cut our teeth on, with unapologetically melodic hooks and uplifting energy for days.
Follow Only Bricks:
Website | Instagram | Facebook | YouTube | Spotify
Music Videos New Music Pop